Monsters once were ghastly beasts that devoured the flesh and blood of human beings. However, since the ascension of the new Overlord, a succubus with godlike power, monsters have taken on utterly different, bewitching, and fantastic forms resembling those of alluring women. These outward changes have been accompanied by dramatic shifts in their ways of life, patterns of behavior, and values.
—foreword to Monster Girl Encyclopedia Vol. II

The Monster Girl Encyclopedia (魔物娘図鑑, 2015) by Kenkou Cross (健康クロス) is a variation on the popular pseudobiblia bestiary genre. In the Dungeons & Dragons-inspired fantasy setting that Kenkou Cross has created, a succubus has risen to the position of evil Overlord, and turned all the monsters into, essentially, nubile female forms obsessed with sex. The second volume in the series (魔物娘図鑑 II, 2016) has introduced some Mythos-related entities including the shoggoth, and the series has gone on to generate a good deal of fanfiction, dōjinshi (同人誌, fan-created artwork, comics, etc.) and expanded media, which varies from the sedate to the outright pornographic…and these two works have been translated into English by DK with “English Adaptation” by Harriet Fray.

But to really understand and appreciate what Kenkou Cross has done, we have to look at how they got here.

Dungeons & Dragons was published in 1974, a collaboration between Gary Gygax and Dave Arneson and published by TSR, Inc. The original boxed set included a Monsters & Treasure booklet which had brief descriptions of and rules for iconic fantasy monsters—and these were, for the most part, taken from generic fantasy (The Hobbit and The Lord of the Rings, Greek mythology, the 1,001 Nights, etc.); there weren’t much in the way of “original” monsters. In 1977 a revised and expanded edition of the game was published which included a much expanded Monster Manual, which included not only more monsters and illustrations on the monsters, but details on their culture, life, habits, etc. These were still pretty scanty, but from this humble beginning nearly every other roleplaying game has developed their own bestiary or critter compendium. In 1980, TSR Inc. published Deities & Demigods by Jim Ward, which included the first published bestiary of the Cthulhu Mythos.

This led to a little kerfuffle; the author had gotten permission from Arkham House to use the Mythos in the book, but Arkham House had also just granted a license to Chaosium, Inc. to develop a roleplaying game based on the Mythos, and they were also developing an RPG based on the Elric stories of Michael Moorcock (who had done basically the same thing as Arkham House). No harm was done, and in the book’s third printing TSR Inc. dropped the two sections with a brief notice.

Chaosium, Inc. itself would take a different approach to its monsters. Efforts to categorize the entities in the Mythos dated back to the 1930s efforts of R. H. Barlow and the 1940s efforts of August Derleth and F. T. Laney, whose critical essay “The Cthulhu Mythos: A Glossary” was published in Beyond the Wall of Sleep (1943, Arkham House). So while the new Call of Cthulhu Roleplaying Game (1981, Chaosium, Inc.) did contain a very Dungeons & Dragons-style bestiary section in the main roleplaying book, it also produced a pair of very novel products that were different than anything TSR, Inc. had done to that point: S. Petersen’s Field Guide to Cthulhu Monsters: A Field Observer’s Handbook of Preternatural Entities (1988) and S. Petersen’s Field Guide to Creatures of the Dreamlands (1989).

These were lavishly illustrated books which hewed closer to Barlowe’s Guide to Extraterrestrials (1987) in design and format than the “standard” roleplaying game bestiary, providing lavish full illustrations for each monster in forms that would go on to be iconic, and solely dedicated to the identification, habits, culture, etc. of the various entities within, instead of game stats. All the stats for these creatures were in the Call of Cthulhu Roleplaying Game book itself, and the books have become so iconic that the latest (7th) edition of the game has produced a brand new version, S. Petersen’s Field Guide to Lovecraftian Horrors (2016).

The Call of Cthulhu Roleplaying Game was not just released in English, however. It was translated into several languages, including Japanese—and the game proved to be a major hit in Japan. More products were translated, including the ’88 and ’89 S. Petersen’s Field Guides (a combined edition was published by Hobby Japan in 1994), and the company and fans in Japan began to produce original material for the game, both official and unofficial—dōjinshi.

One of these dōjinshi products was the Dunwitch IX Field Guide to Cthulhu Monstergals. This was essentially a fan-created spoof of the S. Petersen guides, right down to the format, except that the familiar Cthulhu Mythos entities were replaced by monster girl versions of themselves. 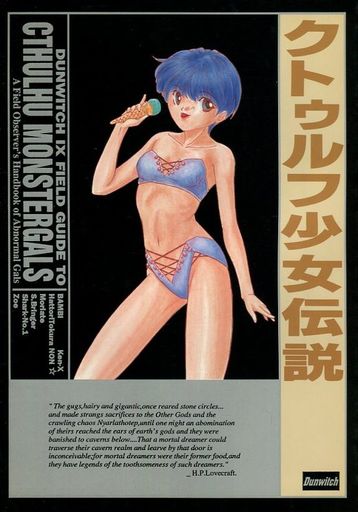 Monster girls are a Japanese cultural phenomenon where a normally frightening monster is replaced with a moe (萌え) version of itself; moe being a term that designates a feeling of strong affection and cuteness, and is often combined with non-anthromorphic entities or concepts to create a (typically) young and attractive female character to personify the normally unrelateable. The juxtaposition might be near-sacrilegious to folks that like to keep the Mythos scary, but should be understood as a product of Japanese fan interpretation, all in good fun. Monster girls have been the focus of “monster girlfriend” manga and anime, including “The Elder Sister-like One, Vol. 1” (2016) by Pochi Iida (飯田ぽち。)…and the Monster Girl Encyclopedia which was published in 2015.

Which brings us back to Kenkou Cross and the Monster Girl Encyclopedia. This book is not a roleplaying game product, although it is derived from and uses some of the same tropes. There is no game system specified, no statistics or mechanics for the monsters like in Dungeons & Dragons. Instead, it is purely a pseudo-literary production, an “in-character” scholarly manuscript from the setting that the monster girls are from, much like the S. Petersen’s guidebooks. Aside from the artwork, which is generally PG-13 (bare female breasts, but no genitalia), the text itself shows a lot of thought and effort that has gone into the monsters, how the change to be part-succubi has effected them, feeding and mating habits (basically the same thing in this case), etc.

The Lovecraftian references are few, and include the iconic D&D monster the Mindflayer, the Wendigo (loosely connected to August Derleth’s interpretation of Ithaqua), the spider-creature Atlach-Nacha (created by Clark Ashton Smith, already the focus of a Japanese game and associated media) and most especially the Shoggoth.

The interesting thing about the Shoggoth entry is that Kenkou Cross has reinterpreted their position as “servitors” to the Elder Things in At the Mountains of Madness with the Japanese pop-culture archetype of the maid—in particular, the popular conception of the “French Maid” outfit popularized in Victorian and Edwardian fiction (and associated pornography) and the act of being subservient in a sense that approaches (and sometimes sublimates into) domination-subjugation fantasies. “Maid-play” need not be violent, as the position can hold a great potential for sexual subtext and power fantasies without crossing the line into rape, but the formal nature of the attire and the potential power imbalance makes maids, butlers, etc. popular characters in Japanese anime and manga.

Shoggoths are slime monsters with amorphous bodies. They were created long ago to serve monsters of the untold nether reaches, but upon acquiring intelligence and emotion with the rise of the current Overlord, they are thought to have fled their once-masters.
—foreword to Monster Girl Encyclopedia Vol. II, 167

Which makes the Monster Girl Encyclopedia incarnation of the Shoggoth both somewhat kinky, and probably the most sex-positive possible spin on the original source material, is that the (now female) Shoggoth feels the need to fulfill this position, but is not actually enslaved and still holds a great deal of power in the relationship, which is basically entered into of their own will (although the Overlord’s influence certainly gives them a push). Needless to say, the various authors of Monster Girl Encyclopedia-derived dōjinshi take whatever tack fits the needs of their particular work, ranging from the benign monster girlfriend romantic comedy to explicit erotica (within the limits of Japanese censorship laws, for works produced in Japan).

Kenkou Cross doesn’t delve deep into the Mythos in this volume; the Lovecraftian entities are hinted at being separate from many of the other monsters under the Overlord’s direct control, but Cthulhu and Shub-Niggurath are not named explicitly. In much the same way, Dungeons & Dragons has largely eschewed using the Lovecraft Mythos directly since Deities & Demigods (1981), although they have Lovecraftian critters in the form of mindflayers, aboleths, and other “aberrations.” Much of the Monster Girl Encyclopedia world remains a very vague fantasy kitchen sink; quasi-medieval in the Dungeons & Dragons manner with adventurers, quests, etc. It is testament to the wide and pervasive influence of Western (particularly British and American) on Japanese contemporary pop culture.

It might be difficult for some Mythos fans to think of shoggoths as basically sex-obsessed slime-girl maids, but that’s where the route of transmission, derivation, and development sort of become important. Because Kenkou Cross’ interpretation of the Shoggoths, for their setting, is really no different or less than any other interpretation of the Lovecraftian entity, from Robert Bloch’s “Notebook Found In A Deserted House” (1951) to “Shoggoths in Bloom” (2008) by Elizabeth Bear. And the MGE version of shoggoths is not restricted to Japan, but has filtered back into English through translation and derivation.

Monster Girl Encyclopedia II (魔物娘図鑑 II) by Kenkou Cross (健康クロス) was first published in 2016; it was translated and published in English by Seven Seas in 2016.