For it is of old rumour that the soul of the devil-bought hastes not from his charnel clay, but fats and instructs the very worm that gnaws; till out of corruption horrid life springs, and the dull scavengers of earth wax crafty to vex it and swell monstrous to plague it. Great holes secretly are digged where earth’s pores ought to suffice, and things have learnt to walk that ought to crawl.
—H. P. Lovecraft, “The Festival”

Set in an unknown but recognizable tomorrow. In the crowded urban structure known as the Warren, people live in close proximity. Isolated from the outside, both physically and economically, the Meers (Meerkats) grow up in the crush of humanity, amid an urban ecosystem grown subterranean and strange with a new horror, one the children call…Pugelbones.

“Pugelbone” is not a Cthulhu Mythos story; there are no quotes from the Necronomicon, no reference to any recognizable corner of the Miskatonic Valley, no alien gods and sinister cults. Yet Nadia Bulkin’s story is built up from a base of Lovecraftian literary DNA, like a slab of artificial meat grown in a lab. A product of the strange and marvelous now, hacking the genetic material of “The Lurking Fear” and “The Rats in the Walls” and building it back up into something you can sink your teeth into.

The protagonist Lizbet was born a Meer. A girl that just liked to break things. An outsider among an outsider group, she is at once sympathetic and unreliable. All she wants is custody of her daughter—and the only way to get it is to interact with the unsympathetic bureaucracy as represented by Dr. Roman. These are adult fears: poor people trapped in a system they never built or opted in to, trying to navigate the weird social spaces of interviews with indifferent people that decide their fate. “Pugelbones” is Lizbet’s story—the story she tells Dr. Roman, to try and win back her daughter, and the story of telling that story, as Roman deflates, dismisses, and directs the conversation. A “passive listener” that has all the power in the relationship, and diminishes Lizbet with insinuation.

Yet Dr. Roman never denies the essential reality of the Pugelbones.

In Lovecraft’s stories like “The Lurking Fear” and “The Rats in the Walls,” the underground space—a favored personal image which appears in his stories—contains or did contain other horrors: a teeming mass of humanity or near-humanity. Societies that set themselves apart, to live, work, breed, and die down there. Written before Lovecraft’s period in New York City, it is still tempting to see an echo in these stories of urban fears, the great crowded tenements and filthy streets. Contemporary concerns, expressed in Lovecraft’s own language and filtered through his own prejudices, but still tapping into the 1920’s zeitgeist. Lovecraft’s stories are told from the interloper’s perspective, from those who had not been born and  bred.

What would “The Lurking Fear” read like, if told from the perspective of a Martense?

[…] a degenerate squatter population inhabiting pitiful hamlets on isolated slopes. Normal beings seldom visited the locality till the state police were formed, and even now only infrequent troopers patrol it. […] With whimpering insistence the squatters told tales of a daemon which seized lone wayfarers after dark, either carrying them off or leaving them in a frightful state of gnawed dismemberment; while sometimes they whispered of blood-trails toward the distant mansion.
—H. P. Lovecraft, “The Lurking Fear”

Nadia Bulkin’s story works because some of those horrors present in the early 20th century still haunt us in the early 21st century. The poor may not be seen as “gently descending the evolutionary scale” as Lovecraft put it, but the Meers are no less the subject to prejudice and stereotype. Lizbet is subject to the same prejudices that Lovecraft’s Catskills white trash, with the added bonus of being a woman, and a single parent, with all the additional onus that brings. These are all adult fears, the kind of tangible horrors of desperation that can face anyone today. Bulkin taps into the same zeitgeist as Lovecraft did; her story works because the situation is presented so realistically.

The Pugelbones are the element of the weird which is interwoven with the more mundane horrors of child protective services and overpopulation, and like many Lovecraftian horrors they are very material entities. An undiscovered species, urban predators. The truth about them is not half as terrible as Dr. Roman’s towing the official government line about their existence, or her insinuations about Lizbet’s relationship with them. They are the great mystery of the piece, only half-glimpsed through the Meer’s story, their presence told in piles of trash and smears of blood.

Yet the story is theirs, as much as it is Meers: these Lovecraftian beasties are essential to the piece, and Bulkin wisely keeps them off the page for most of it. Readers get hints of them long before they see them, rumors and legend before the Pugelbones appear in a scene. Rather than being specifically horrific themselves, the Pugelbones are the catalysts for the human horrors; the outside element that disrupts the human narrative, like the xenomorphs of Ridley Scott’s Alien, the one terrible unpredictable event which starts off the cascade of adult fears. 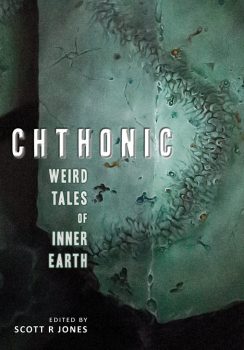 Bobby Derie is the author of Sex and the Cthulhu Mythos