The date is significant; the first English-language biographical comic of H. P. Lovecraft was Kuchar’s “H.P.L.” in Arcade #3 (1975), and the first full-length biography, L. Sprague de Camp’s Lovecraft: A Biography (1975), were both published three years later. While Charlton Comics had published a very brief piece on Lovecraft in Baron Weirdwulf’s Haunted Library #61 (1971), that was only about a third of a page at the back of the book. Yet based on the details in the panels, the makers of this comic book (neither writer or artist is credited) obviously knew their Lovecraft. From the very first page: 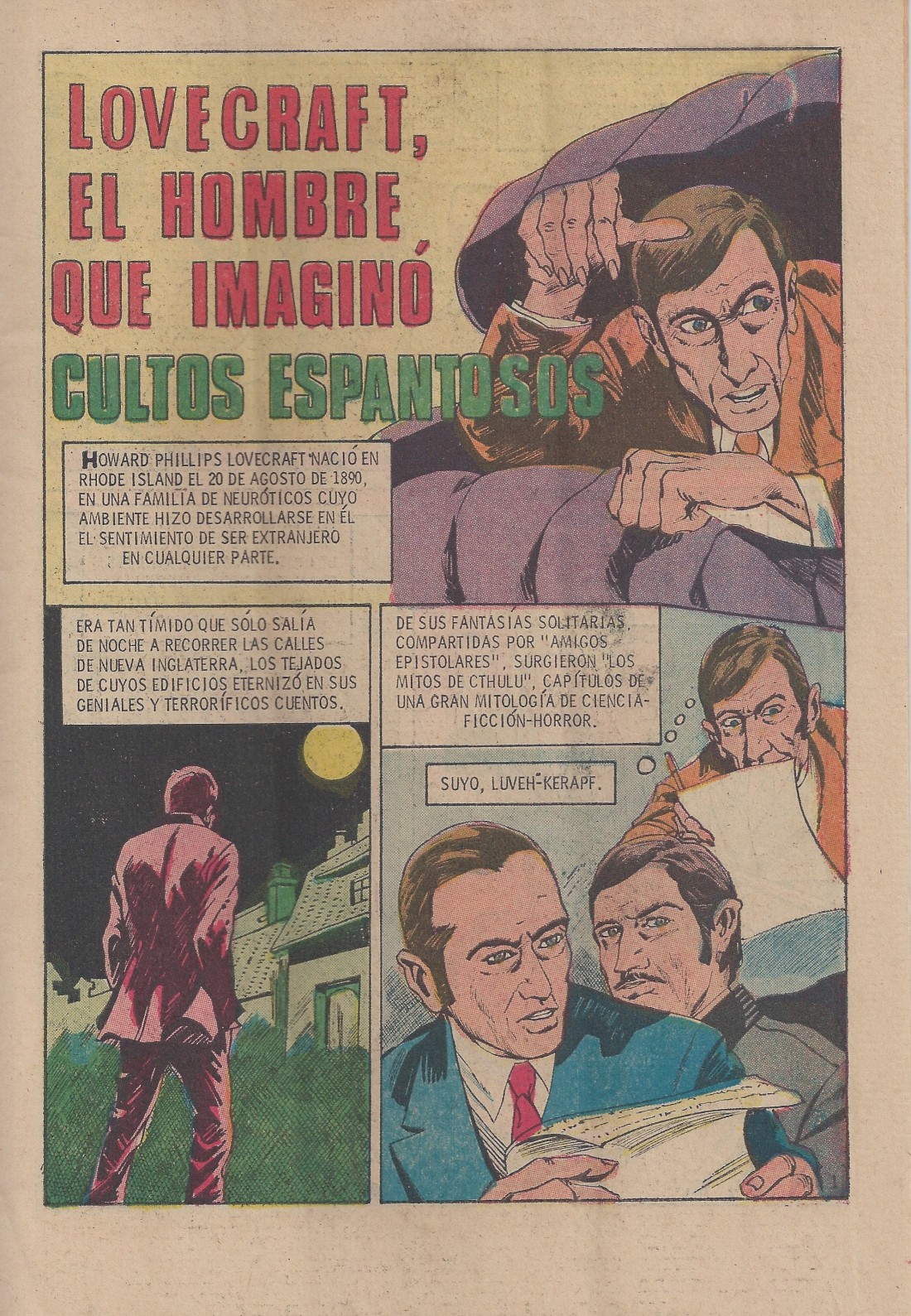 This is a very fair snapshot of Lovecraft’s life, as readers of imported Arkham House titles (or the cheaper paperback reprints) would have had in 1972, right down to signing off as “Luveh-Kerapf” (“Luveh-Keraph”). Nor were the writers/artists unwilling to show their influences:

This issue would have been on the stands next to Mexican horror comics like Tradicions y Leyendas de la Colonia, El Monje Loco (issue #52 of which contains an uncredited adaptation of “The Colour Out of Space”), Las Momias de Guanajuato, and Mini Terror. These were infinitely more lurid and creepy than nearly anything on the newsstands in the English-speaking world in the early 1970s, with the possible exception of Warren publications like Eerie and Creepy. Mexico had no Comics Code Authority, but the Comisión Calificadora de Publicaciones y Revistas Ilustradas had limited resources with which to censor comics.

In production quality, the paper and printing are cheap and shoddy by today’s standards—but by 1970s standards, this wasn’t half bad, definitely on the lower end of the scale of professional publication but far from embarrassing to be seen next to second-tier horror comics like Charlton’s Haunted or Gold Key’s Doctor Spektor. Some of the panel layouts in particular show an awareness and willingness to experiment. This triptych layout for example:

Not the height of comic art in the 1970s by any means, especially the bizarre anatomy of the critter in that lower right-hand panel, and the backgrounds are perfunctory at best, but the framework is more than just a four-by-four grid. Someone was definitely trying to invoke something, no matter the limitations of their skills or the medium.

While nominally Vidas Illustres #272 begins as a bio-comic of Lovecraft, by page eight it morphs into a very brief adaptation of “The Shadow over Innsmouth,” presented as a quasi-biographical story of Lovecraft himself! This is actually pretty fair for such an abbreviated epic, with the most notable odd discrepancy being the mix of clothing styles—the protagonist’s top-hat recalls the 1800s rather than the 1900s, although I suspect it owes something to The Haunted Palace (1963), a period horror film nominally adapting Edgar Allan Poe’s story of the same name but really borrowing from Lovecraft’s “The Case of Charles Dexter Ward”—the second figure in the third panel of the first page bears a distinct likeness to Haunted Palace star Vincent Price.

Some things did get lost in translation, or at least a little jumbled. The swastika-shaped signs are reduced to a single out-of-context panel that probably confused a lot of readers in a post-World War II Mexico. In one panel, “Iä! Iä! Cthulhu fhtagn” is transliterated as “¡Ia, Ia, Cthulu tfañg!” These are features more than flaws, writer and artist trying to cram as much into the thirty-two page comic as they could.

There is something really poignant about the last pages, where fact and fiction combine and you get this version of Lovecraft reflecting back on his life and saying:

The horror of my lonely and extravagant life then acquired meaning: I am not of this world.

As an individual work, Vidas Ilustres #292 might be seen by many as a curiosity—but it should be seen as exemplary of a distinct mode of Spanish-language graphic works involving Lovecraft and his Mythos. Artists from Latin America such as Alberto Breccia (Los Mitos de Cthulhu), his son Enrique Breccia (Lovecraft), and Horacio Lalia (Les Cauchemars de Lovecraft) have crafted superb adaptations and original stories based on Lovecraft’s work, as have Spanish artists such as Joan Boix (Grandes de la Macabro) and master painter Esteban Maroto (Lovecraft: The Myth of Cthulhu). Several of these works have been translated into English, but most can only be read in their original Spanish or in other languages.

I could go on; the field is vast, and the influence of Lovecraft and his mythos runs deep. As far as I am aware, this issue was never reprinted in any form. If you are interested in reading the long out-of-print Vidas Illustres #292 yourself, the issue has been scanned and uploaded to the Internet Archive, where it can be read for free.

My thanks and appreciation to Silvia Moreno-Garcia whose article “Mexican Horror Comics” in the Weird Fiction Review #10 provided some of the background and inspiration for this piece.