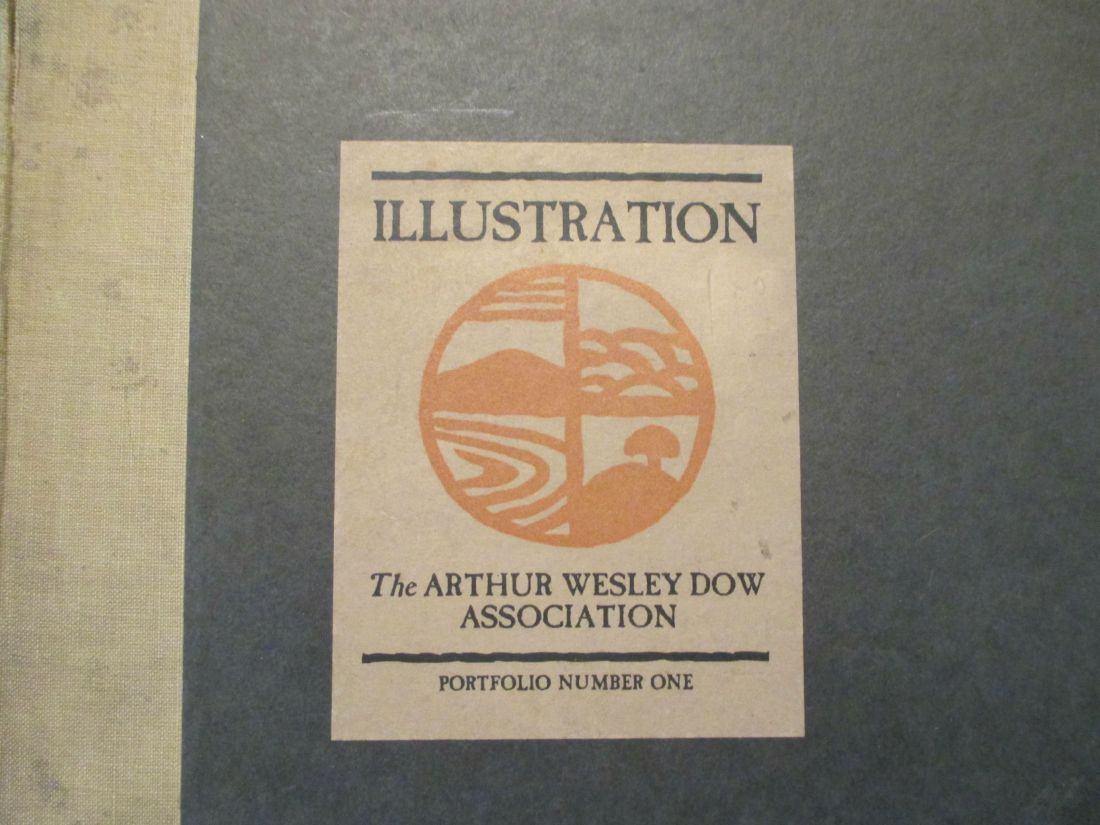 There’s no use in my trying to tell you what they were like, because the awful, the blasphemous horror, and the unbelievable loathsomeness and moral foetor came from simple touches quite beyond the power of words to classify. There was none of the exotic technique you see in Sidney Sime, none of the trans-Saturnian landscapes and lunar fungi that Clark Ashton Smith uses to freeze the blood.
—H. P. Lovecraft, “Pickman’s Model”

When fans think of the artwork most associated with the literary works of Lord Dunsany, the first and last name is Sidney H. Sime, whose fantastic illustrations graced The Gods of Pegāna (1905) and most of Dunsany’s other fantasies. Sime also contributed art to illustrate works by Arthur Machen and William Hope Hodgson, and Lovecraft held him up in his fiction and letters as an artistic genius. Today, when fantastic art is so widely available online, and of such a high quality due to the proliferation in books and courses of technique and the availability of tools and materials, readers might lose sight of how rare and precious really good fantasy art was back in Lovecraft’s time…yet even in 1925, when Weird Tales was only a couple of years old and still finding its feet, Lord Dunsany’s fantasies inspired a group of women artists…and found publication.

The Arthur Wesley Dow Association was founded at the University of California, Southern Branch (now UCLA) in 1922. Materials related to this portfolio (presumably the original art or proofs) are still held at the UCLA library. This portfolio appears to have been begun as early as 1923, and was published in 1925. Compiled by Helen C. Chandler, a professor of arts at the University of California. 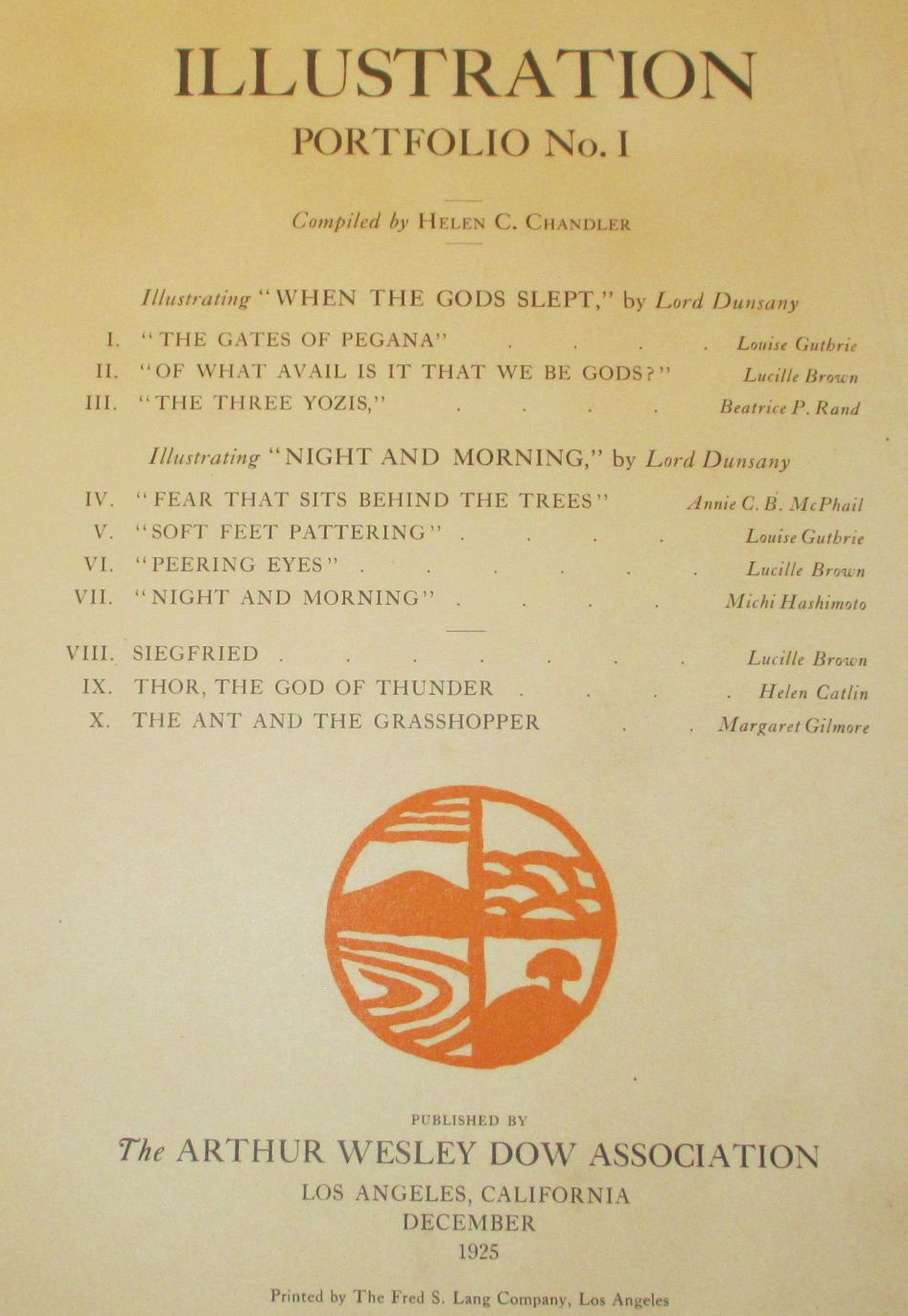 In form, this is ten unbound black-and-white plates—seven plates by five artists illustrate two stories drawn from Lord Dunsany’s collection Time and the Gods (1906). They represent interpretations of Lovecraft’s work. Not copying Sime, but presenting their own interpretations, in their own medium and style.

All the gods were sitting in Pegāna, and Their slave, Time, lay idle at Pegāna’s gate with nothing to destroy, when They thought of worlds, worlds large and round and gleaming, and little silver moons. Then (who knoweth when?), as the gods raised Their hands making the sign of the gods, the thoughts of the gods became worlds and silver moons. And the worlds swam by Pegāna’s gate to take their places in the sky, to ride at anchor for ever, each where the gods had bidden. And because they were round and big and gleamed all over the sky, the gods laughed and shouted and all clapped Their hands. Then upon earth the gods played out the game of the gods, the game of life and death, and on the other worlds They did a secret thing, playing a game that is hidden.
—Lord Dunsany, “When the Gods Slept”

Today, artwork like this might be classified by some as “fanart.” The term is often somewhat derogatory, regardless of the skill, imagination, or time put into the piece. The distinction between “art” and “fanart” grew up in the organized science fiction fandom of the 1930s, at the same time when lines were drawn between “fan” and “pro”—those writers and artists who were good enough to graduate from amateur efforts to actually sell their work professionally to magazines. At the time these works were made, the distinction did not exist. There were, certainly, amateur writers and artists in abundance—but the hallmark of the work was its quality, not necessarily who or why it was made. 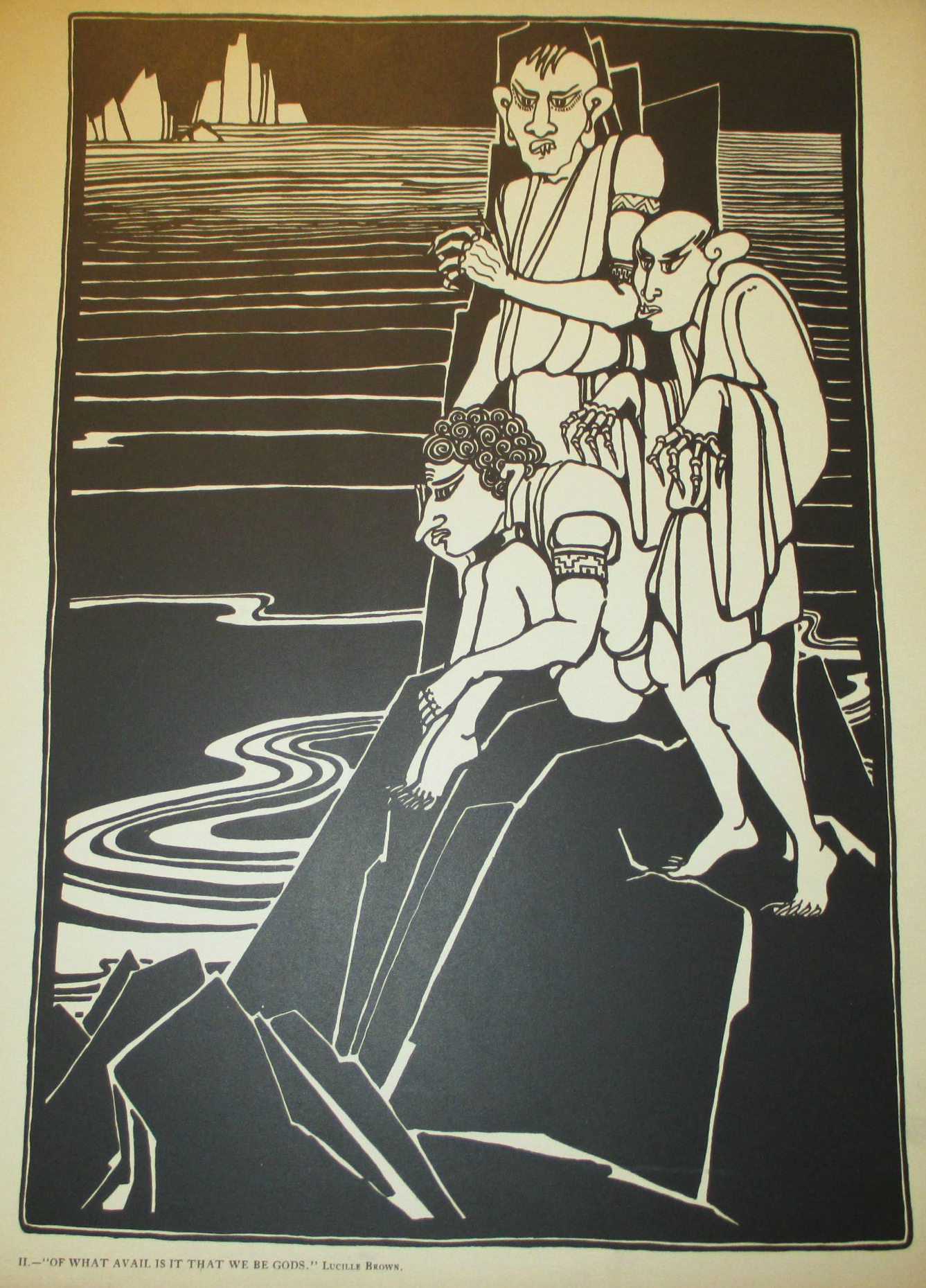 Thus the Yozis became gods, having the power of gods, and they sailed away to the earth, and came to a mountainous island in the sea. There they sat upon the rocks, sitting as the gods sit, with their right hands uplifted, and having the power of gods, only none came to worship. Thither came no ships nigh them, nor ever at evening came the prayers of men, nor smell of incense, nor screams from the sacrifice. Then said the Yozis:

“Of what avails it that we be gods if no one worship us nor give us sacrifice?”

And Ya, Ha, and Snyrg set sail in their silver galleons, and went looming down the sea to come to the shores of men.
—Lord Dunsany, “When the Gods Slept”

It is significant that the artists in this portfolio were women, because women were generally underrepresented as artists in fantasy and weird fiction at this time (and would continue to be for decades after), prominent exceptions like Margaret Brundage not withstanding. Yet the art itself is not distinctly “feminine” any more than it is “fanart.” These are labels that we as readers, trying to fix this art into a familiar framework, might hang on these pieces, but by themselves they are starkly beautiful, with the vast solid expanses of black still vivid after nearly a century, even though the cover of the portfolio has faded and some of the page-edges are soiled and torn.

But as the gods slept, there came from beyond the Rim, out of the dark and unknown, three Yozis, spirits of ill, that sailed up the river of Silence in galleons with silver sails. Far away they had seen Yum and Gothum, the stars that stand sentinel over Pegāna‘s gate, blinking and falling asleep, and as they neared Pegāna they found a hush wherein the gods slept heavily. Ya, Ha, and Snyrg were these three Yozis, the lords of evil, madness, and of spite. When they crept from their galleons and stole over Pegāna‘s silent threshold it boded ill for the gods.
—Lord Dunsany, “When the Gods Slept”

In creating his own mythology, moving outside of the established gods and monsters of familiar myth and legend, Dunsany was breaking some of the rules and conventions. He is often very nondescriptive of the entities in his stories, letting the reader fill in the blanks. The Yozis in their different incarnations do not attempt to directly map to any traditional form of stock evil; they are not pitchfork-carrying devils with horns and bifurcated tails in their literary descriptions, nor do the artists attempt to render them as such. Left without much traditional guidance, each artist is forced to imagine and depict them in her own way. 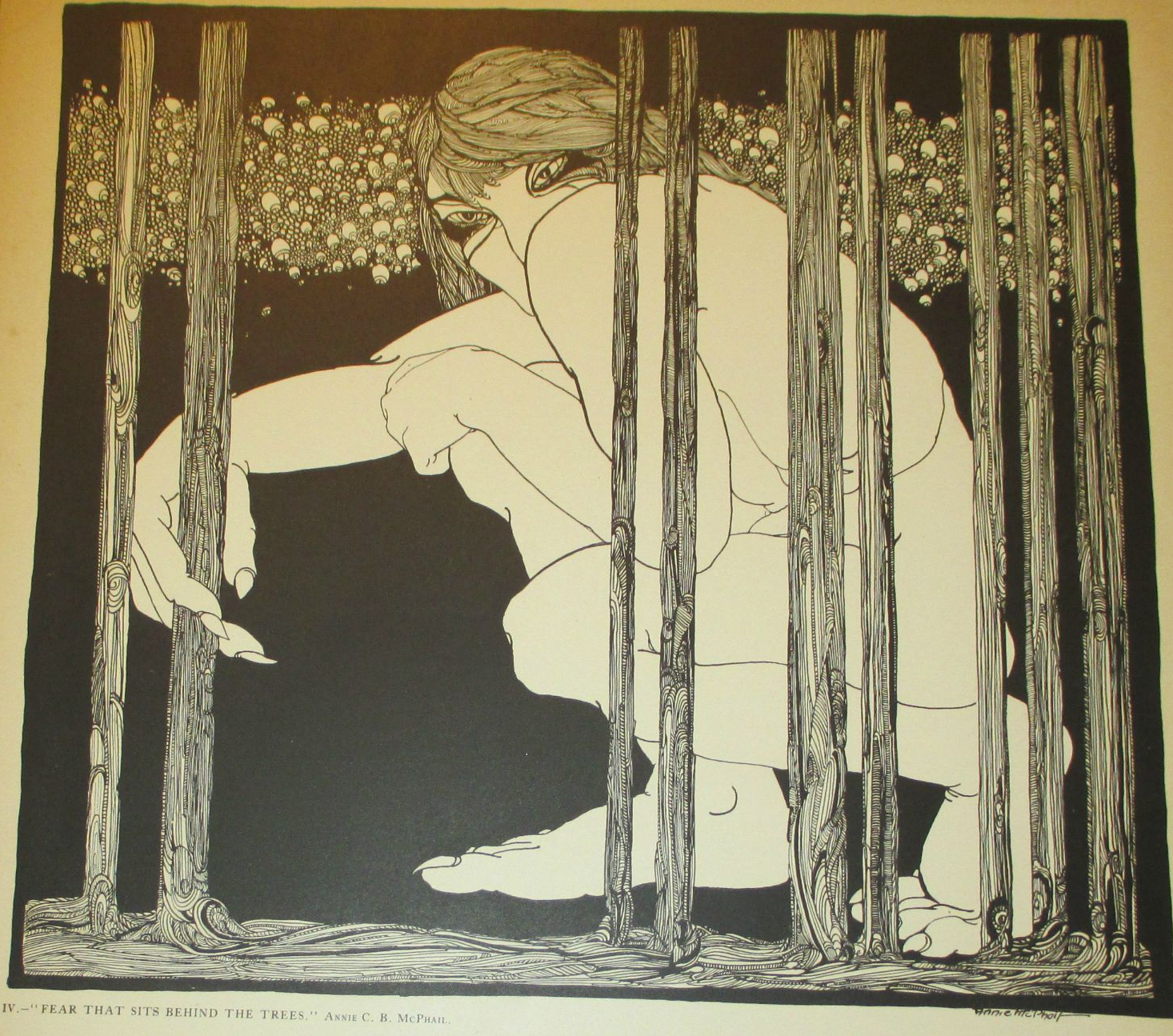 Free of restriction to normal conventions of what such fantastic scenes might look like, some of the artists experimented with depictions of scale and contrast. There is an exaggeration of the human form in the crouched figure staring out of the page that recalls Aubrey Beardsley.

Look at the trees, how the different artists defined their bark and roots. There’s nothing wrong with the fact that each chose her own means of expression; they were not collaborating on a single narrative, but each offering their own interpretations. If Lord Dunsany wrote the myth, then these artists were each storytellers, presenting the stories in their own way.

Different is good. While many fans such as H. P. Lovecraft sincerely appreciated the combination of Lord Dunsany and S. H. Sime, that is still only one possible combination—other artists, working on their own, might find their own way to express what visions Dunsany’s prose gives to them, and it detracts nothing from Sime to say that some other artist might find something in their own work that lacks from his. They are only different points of view, not in competition. 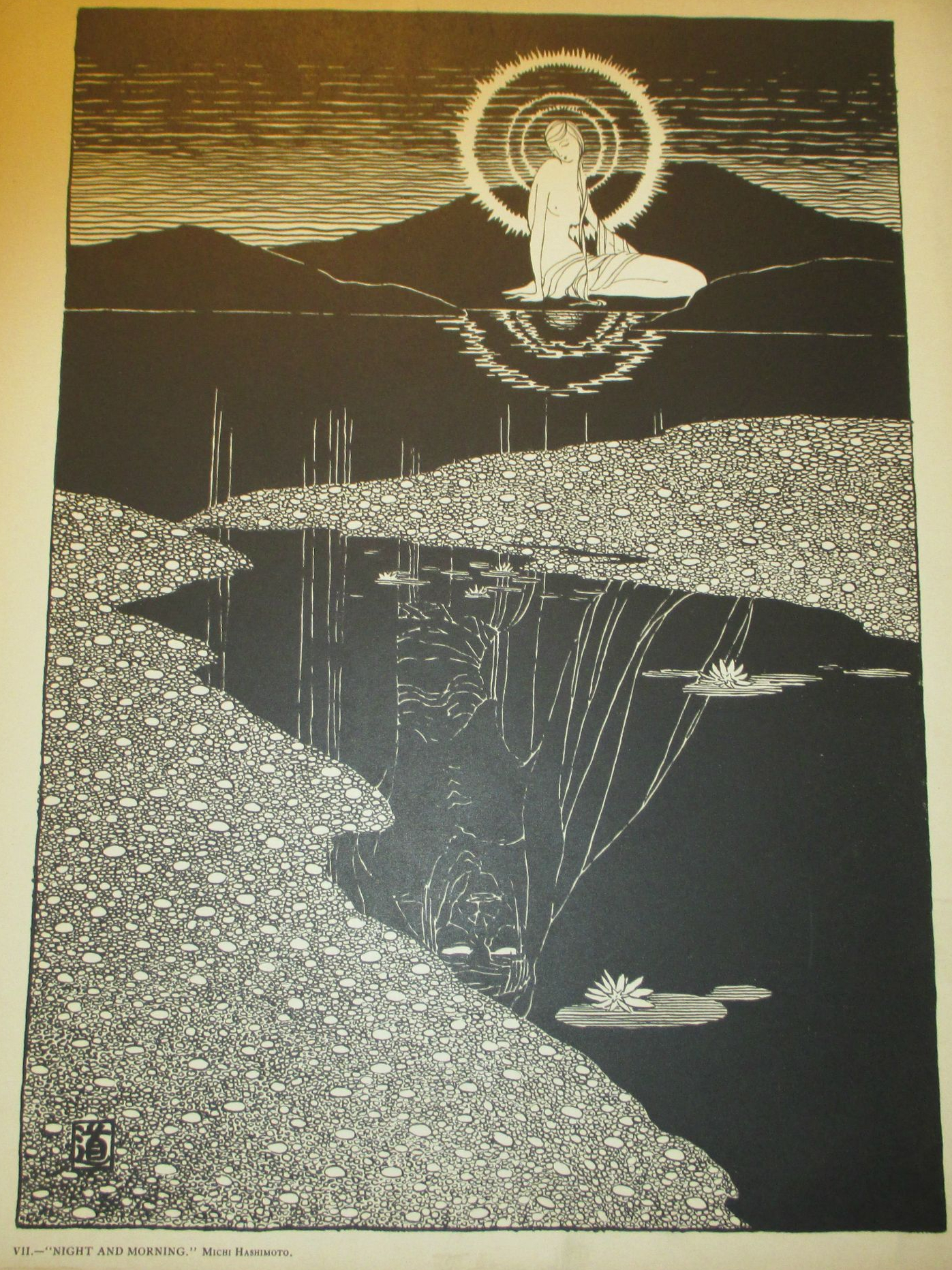 Once in an arbour of the gods above the fields of twilight Night wandering alone came suddenly on Morning. Then Night drew from his face his cloak of dark grey mists and said: “See, I am Night,” and they two sitting in that arbour of the gods, Night told wondrous stories of old mysterious happenings in the dark. And Morning sat and wondered, gazing into the face of Night and at his wreath of stars.
—Lord Dunsany, “Night and Morning”

Michi Hashimoto is the only Japanese-American in this portfolio; she had graduated from UCLA in 1924. Her interpretation draws deliberately on both Japanese and Western aesthetics—fitting, given how extensively Dunsany himself drew on traditions of exoticism and Orientalism to lend an air of the exotic to his stories. There is some irony there, almost, in an artist capturing something of the “authentic” exotic to this scene.

Compare this scene, with the hero of the Nibelunglied (a Western fantasy if there ever was one), encountering a three-headed dragon that obviously draws on depictions of Chinese dragons. This kind of correspondence and amalgamation  can work—compare with the Monster Girl Encyclopedia II (2016) by Kenkou Cross (健康クロス)—but there is definite juxtaposition of incongruous elements in having the Western hero/knight facing an Eastern dragon in this interpretation.

This atypical (per-Marvel Comics, at least!) interpretation of Thor underscores the overall theme of this portfolio: these are myths. Some old, some contemporary, but for all that just stories to be told and retold—and they aren’t set in stone. How we look at a Mythos can change based on the syntax of our lives. There is no one true canon depiction of Thor, or the Yozis, or Cthulhu.

Illustration Portfolio No. 1 needs not have any particular moral or lesson. The artists of this volume were producing art, and left no particular comment on how it should be interpreted or understood. Yet by its very existence, and looking at these works, readers might do well to reflect on the nature of art and interpretation in the Mythos. Sometimes, there is no one right answer, no single truth.

There are only many different people working out their vision, in their own styles and with their own influences, and the different combination of art and text can sometimes mean more than either does separately.