This dossier collects research on the nineteenth-century engravings of a mysterious Goya student that represent impossible beings and disturbing anachronisms.

Following in the footsteps of the Genius of Providence and inspired by the Cthulhu Mythos, the group of writers The Bastards of Abdul Alhazred and the cartoonist Raúlo Cáceres come together to recreate this universe of madness and darkness.
—Back cover copy, Insania Tenebris, translated from the Spanish

Spanish artist Raúlo Cáceres is no stranger to Lovecraft, and though many fans might not recognize him by name, there’s no mistaking his incredibly detailed, explicit style that often takes horror and eroticism for its subject. His comics and graphic novels in this vein include Elizabeth Bathory, Cuentos Mórbidos, Justine y Juliette (after the Marquis de Sade novels), and Agues Calientes, which have been translated into several languages. Less pornographic but still fun are books like Galeria de los Engendros Album de Cromos de los Monstruos, an album of monsters in the vein of 1970s and 80s compilations for kids.

For English-speaking audiences, Cáceres’ most notable work would include his work on Crossed, Crécy, and The Extinction Parade, but he also provided some gorgeous covers for Alan Moore and Jacen Burrow’s Providence which showcase not just his skill and style, but his deep appreciation for the details of Lovecraft’s Mythos. 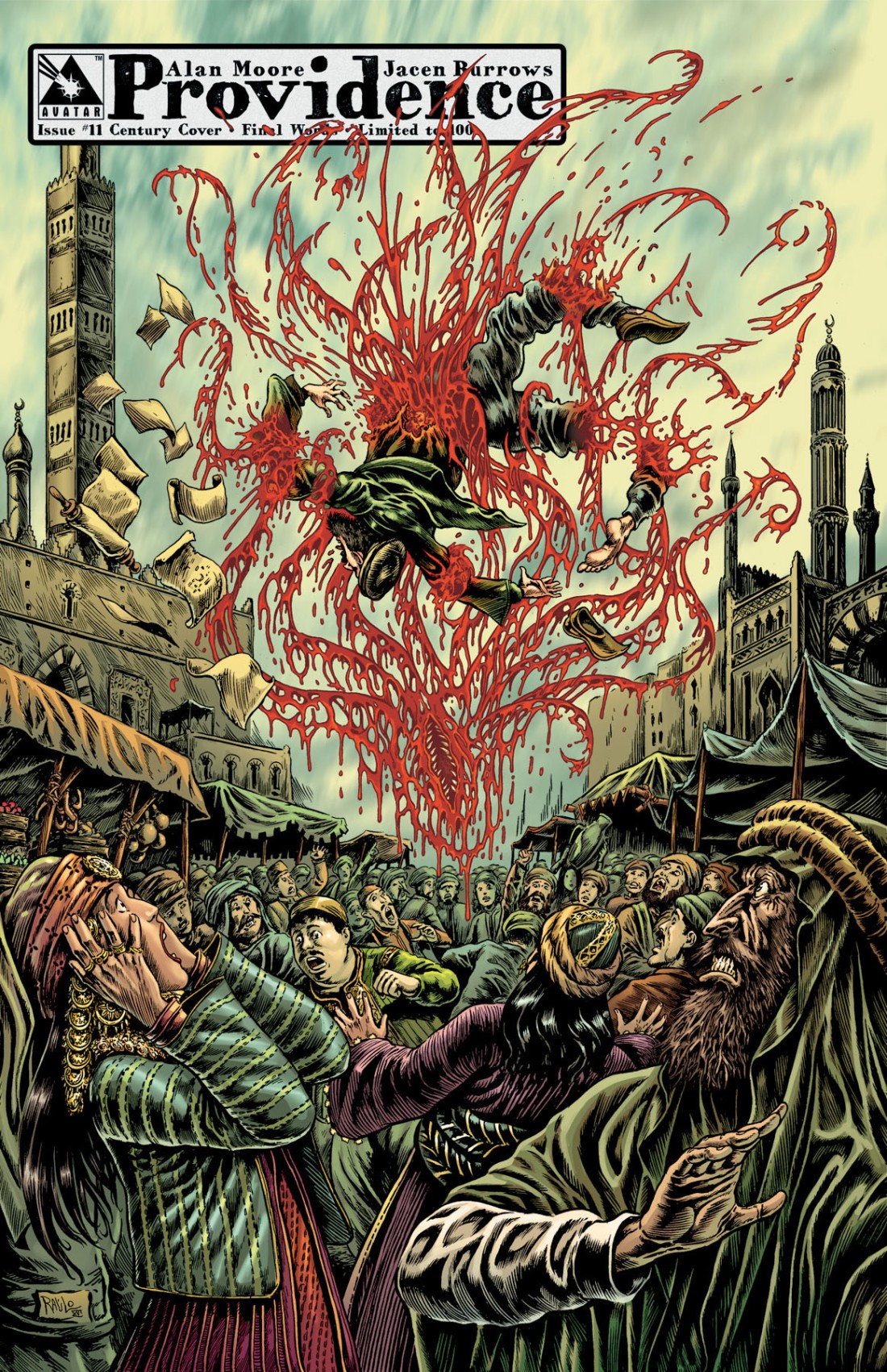 Cáceres was also the artist on the Lovecraftian horror series Code Pru, written by Garth Ennis, and Ennis/Cáceres continued the storyline in the anthology book Cinema Purgatorio, and provided illustrations for the Lovecraftian alien gods of Spanish roleplaying game Eden.

In 2020, Raúlo Cáceres published the first volume of Insania Tenebris: Textos de Los Bastards de Abdul Alhazered (Shadowy Madness: Texts from the Bastards of Abdul Alhazred), a 32-page collaborative project where multiple Spanish writers provided short text pieces to accompany Cáceres’ unique vision of Lovecraft’s Mythos—which takes the form of a series of found documents. Imagine stumbling across a dossier of evidence proving the existence of the Mythos, from ancient times through World War 2 and to the present day—illustrated in glorious and disturbing detail.

It is these collaborators who are the “Bastards of Alhazred”: Gabriel Soriano, Emilio Gómez, J. M. Morcillo, La doctora X, Gómez Navarro, Tito Alberto, and of course, Raúlo Cáceres himself.

In the bed of a coffin attends
Above lost lady, her skin stained
A melancholy ghoul persists and remains.
—”Despertar oscuro” by Emilio Gómez, Insania Tenebris 10

In said engraving, and as described in the Notre-Dame text, the figure of a knight ritually invoking dark beings stands out who, through the use of bloody prayers, will seek the intersection with beings from beyond, availing himself by reading from the forbidden book De Vermis Misteriis, used as a conductive key to interdimensional mediation.
—”Las cartas de Notre-Dame” by Emilio Gómez, Insania Tenebris 6

There are influences here beyond just Lovecraftian fiction and in-jokes. As with Monster Girl Encyclopedia II (2016) by Kenkou Cross (健康クロス), the Call of Cthulhu Roleplaying Game had an obvious visual influence in the way Cáceres depicts some of his Mythos entities, notably the Night-Gaunts, Mi-Go, and Dark Young of Shub-Niggurath. The nature of the texts are also representative of gaming influence: these are all in-character pieces, found documents, meant to be read and interpreted not as complete stories in and of themselves but as deliberate fragments—like piecing together the clues in a Cthulhu Mythos story, from copied snatches of journals and paintings.

In it, he finds an old diary signed by a certain Captain Pierre Eaudon, written in French, with strange drawings of human figures of reptilian aspect, mathematical calculations, anagrams and the words “YIG” and “VALUSIA” repeated obsessively throughout of the text.
—”Informe de las SS” by J. M. Morcillo, Insania Tenebris 14

There are scenes in this portfolio which might turn a weak stomach or dissuade the prudish; notably a cannibal feast captured in particularly lurid detail, and the final pièce de résistance which captures Cthulhu and his paramour mid-coitus as the acolytes look on…and there are scenes that might make a reader smile, like the nod to death metal church-burning, the Mi-Go and the astronauts…and maybe just the care and detail that went into the written work as well.

For make no mistake, while Cáceres’ art is the main attraction (especially for those who don’t read Spanish), this is a true collaboration and the Bastards deliver appropriately creepy context that adds depth and substance to already fantastic scenes. There is a story here, told in bits and pieces, building up to more than just a portfolio of exquisite artwork. Goya’s student found himself on the trail of something bigger and darker than he could have imagined.

As of this writing, Insania Tenebris (2020) is only on sale in Spain, and has not been translated. A second volume, Insania Tenebris 2, is due to be published in 2021…and if anything, looks more daring and fantastic.

With thanks and appreciation to Iantha Maria Fyolek for her help. Any errors in translation are mine.

One thought on “Insania Tenebris (2020) by Raúlo Cáceres”